How I Planned and Celebrated Holi in Mathura and Vrindavan 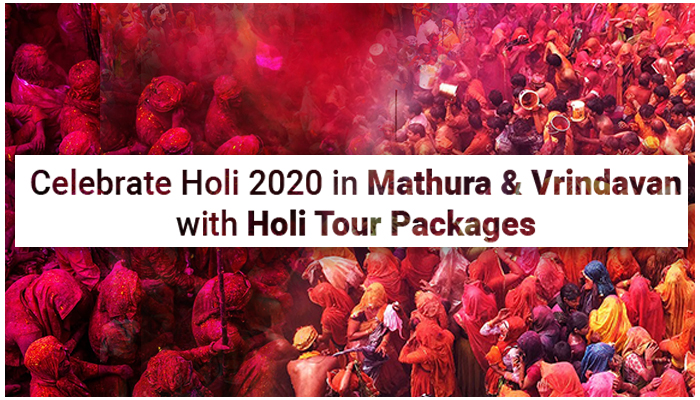 Holi “Festival of Colors” is one of the biggest festivals celebrated all over India. It is one of the most prominent Indian festivals, which has some unique place in ‘Culture of India’. It is celebrated on the pious day of ‘Falgun Purnima’ in the arrival of the fresh Spring Season after the spiritless winters. The celebration of this colorful festival attracts millions of foreigners to be a part of such an exuberant festival.

Braj is a place around Mathura and Vrindavan that attracts pilgrims and tourists from India as this place is a spiritual land which is the hometown of Radha-Krishna, Legends of the Hindu Mythology.

It is believed that Lord Krisha and his beloved Radha spent their childhood in the Braj. Though Holi celebrations are common in all regions of the country “Braj Ki Holi” is known all over India and the world.

So if you are planning to explore in the exuberant colors of Holi and want to know more about Braj’s Holi celebration then here I’m sharing my thrilling experience of Holi festival celebration in Mathura and Vrindavan that will make you fall in love with this colorful festival of India.

After the arrival at Delhi Airport, our traveling agent picked up. Delhi, the capital of India is about 180km from Vrindavan, the nearest and the center spot to meet the package provider representative. Our 7 day Holi festival tour started with a drive to Barsana which is about 50km from Vrindavan.

It took nearly about 3 to 4 hours to reach Barsana. It is said Lord Krishna’s birthplace is Nandgaon and his beloved Radha’s is Barsana. It is assumed that the notorious Krishna from Nandgaon uses to tease girls (Gopis) from Barsana especially to his dearest darling Radha.

Krishna always uses to complain about his dark complexion with his mother, one day his mother asked his Godly son Krishna go and color those people whom you are envious of. So he rushed to his girl Radha, he smeared her face with colored powder along with other Gopis.

Radha and Gopis in retaliation took their sticks (Lathi) to beat Krishna. So since then, this festival here is celebrated as Lathmar Holi with happiness and little naughtiness.

After listening to such an amorous story of the immortal love of Radha-Krishna from our driver on the way to Barsana, our tiring journey seemed exciting and energetic.

Upon Arrival at Barsana, check-in to the Traditional hotel for the night stay. The day slept with the excitement of tomorrow’s celebration.

After having breakfast, we were asked to get ready for the Holi celebration in Barsana (a village in Mathura). Our group stood astounded by the mesmerizing view of the Holi place.

The air of the place seems so mischievous, there was a prankish welcoming of Krishna’s landmen. With the intention of teasing women by singing provoking songs, they enter the place with expanded chest soaked in the colored water.

And the curious women waiting with their multi-colored sticks (lathis) to beat naughty people. And like this, the Holi Celebration got proceeded. The whole day was filled with young and passionate energy, worth coming.

The next day of my Holi tour celebrations in Barsana was followed by a similar celebration in Krishna’s village Nandgaon, where Radha and other Gopis would come to take revenge on Krishna and his friends by throwing colored powder and splashing colored water on them.

All the women from Barsana like that of Radha grouped together to Nandgaon in a mood to retaliate on the men of Nandgaon who came to woo them, by holding the wooden colored sticks to beat them, on the other hand, men where men were holding a wooden shield to protect themselves.

At the courtyard, the main celebration started in the temple, which looks like a country of vibrant colors. People from both the side of villagers sat together after splashing colors on each other, they involved themselves in singing, dancing and eating.

The very next day was dominated by fresh soothing flowers. Visiting Vrindavan, not Banke Bihari Temple, then it is a sin. Our travel agent asked us to have morning breakfast, after that our van was all ready to take us to the renowned temple of India, “Banke-Bihari Temple”.

Temple lord Bihariji (name of Krishna in Raj) is dressed up in white clothes and adorned with beautiful flowers by a priest of the temple. Goswami, the priest sprinkles the color on the devotees.

The whole atmosphere of the Temple is made lively by spiritual music (bhajans) and in the background, people danced with their whole-heart of devotion. The air of the city becomes full of colors and the spirit of enthusiasm is on its full color.

The day was filled with emotions and cheerfulness, Women in such small places were lead by a very difficult life after the demise of their husbands and were forcefully banished from their husband’s home and were sent to the far-off widows’ ashram in cities like Vrindavan and Varanasi.

Society never respected these women and was compelled to wear white clothes only, use of even a single color was banned on them, they were coerced into live a simple and colorless life.

A few years back, with a boom widow of the Pagal Baba Widow Ashram, Vrindavan decided to blow out this ruthless ritual from the orthodox world and with their emotion explosion they played Holi with the most beautiful colors of the world.

It was our good fortune to be a part of such an encouraging and inspirational place and brought solace and colors in their life.

In the morning, after having a delicious breakfast, we were taken back to the Temple of Banke-Bihari, as the door of the temple opens for all the visitors, to play Holi with Lord Krishna itself.

This big celebration is held a day before the actual Holi, where the priest throws the color and holy water which was offered to the Temple’s Lord while the public was chanting in chorus that makes the atmosphere more exuberant.

The celebration took place from 9 am to 1:30 pm before lunch-time. After having appetizing lunch, we proceed to Mathur to participate in the celebrations held at Vishram Ghat. Around 10 vehicles were decorated with multi-colored flowers in the procession and little sweet kids were dressed up as Radha-Krishna.

In the evening, along with many cultural programs, the effigy of ‘Holika’ (lady demon) was being burnt to signify Victory of good over evil. This procession is called “Holika Dahan”.