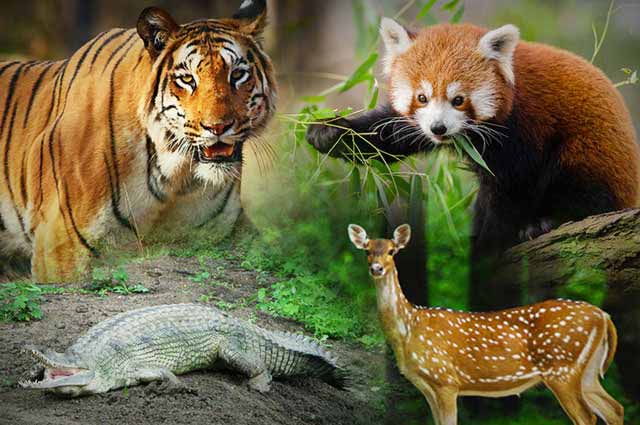 Planning a wildlife holiday in India? Read this article until the end and know some most popular holiday destinations for wildlife tours in India.
India is a wide country and has very rich and diverse wildlife that attracts many nature lovers from all over the world. From its giant mountains to marshy lands, India has many wildlife conservation parks and sanctuaries in its lap.

Here we have listed some best wildlife destinations that offer a never forgettable experience of wildlife to its visitors during their wildlife tours in India.

Ranthambore National Park is one of the most amazing holiday destinations for wildlife tours in India which was known as the best hunting ground for the Maharajas of past India. Located in the Sawai Madhopur region of Rajasthan and famous for its huge population of tigers and bird watching tours. The park has many waterholes and ancient ruin structures that always being crowded with many wildlife enthusiasts during the whole year.

Species to See: The park is home to many species to see such as Tigers, Leopards, Hyna, Wild Cats, Egrets, Parakeets and more.

Situated into the dense Mangrove forests is a paradise for nature lovers and wildlife seekers. Spread over 50 islands, the park is famous for its high density of tigers along with 250 species of birds in the area.

The park is also among the best holiday destinations for wildlife holidays in India. Situated in the Nainital district of Uttarakhand, Jim Corbett national park is also known for its high density of tigers. The most popular attraction of the park is its rarely found white tiger that can be seen to anyone who is lucky. One can also enjoy a night safari at the park to catch a glimpse of amazing wildlife.

Mostly famous for a good amount of population of Asiatic Lions, Gir National Park in Gujrat is one of the best destinations for exciting safaris and a glimpse of these kings of Jungle. You can also take a boat ride in some lakes that goes through the jungle.

Situated at the cardamom hills, Kerala the park is surrounded by lush green cliffs and landscapes that make this park as one of the best holiday destinations for wildlife tours in India.

Famous for a large population of tigers and langurs, Bandhavgarh National Park is one of the oldest and largest national parks in India. Rarely found species of white tigers is the point of attraction here.

Apart from tigers, Bandhavgarh National Park is also famous for its ancient fort and nearby Khajuraho temple that you could not afford to miss while visiting here.

Situated at a high altitude on snow-capped hills in Jammu Kashmir, Hemish National Park is one of the hidden national parks in India. The park is covered with pine forests and snow-capped mountains which seems like a heaven for nature & wildlife lovers.

Where to Stay: No hotels nearby but you can stay at the nearby villages which offer homestays.

Being one of the oldest and largest national parks in India, Tadoba Andhari National Park is home to a huge population of Tigers and various species of Birds. One can enjoy jeep safari and canter safari and also a bird watching tour in the park.

Situated in the Chandrapur district of Madhya Pradesh, Panna National Park is one of the best holiday destinations in India for Nature and wildlife lovers. Spreading over 500 square kilometers, the park is bounded with beautiful dense forest and lush hills that pulls thousands of tourists in every season of the year.

Where to Stay: Taj Safari Resort and Ken River Lodge

Home to a huge valley of flowers, Nanda Devi national park is one of the most beautiful parks that should be visited once by nature and wildlife lovers. The park does not have a huge population of birds but still, Asiatic Black Bears, Blue Sheeps, and Musk Deers are some species that could be seen in the park.

Where to Stay: Badrinath Hotel and Joshimath Hotel.

So these are the 10 best destinations of India that nature and wildlife lovers should consider one before planning their wildlife holidays in India. These places are best for a great experience of amazing wildlife in India. If you liked the article then do share your experience in the comment section below.